IN THE STEPS OF THE GIANTS (Dins lei piadas dei gigants) is a suite of songs borrowed to the poems taken from various collections by Roland Pécout, a walking and drifting poet of the occitan revival, whose work is characterized by his links with the beat generation and the poetic worlds from the 60s and 70s.

Rather than criss-crossing an already cluttered way, polyphony invites us to a genealogical discovery. There, some ground-breaking poets and Pécout tell the strength as much as the necessity of their attachment to popular cultures.

So Allen Ginsberg draws into native american customs to redefine a responsible position towards Nature and our nature ; Pier Paolo Pasolini becomes intoxicated with a game of unmentionable desires, in a popular celebration, and he goes and quenches his thirst for love with a people considered in its essence ; Jack Kerouac waits like a revelation to know his destination while Hafez (خواجه شمس‌‌الدین محمد حافظ شیرازی) roots himself into drunkenness to better escape into the languidness of an inner journey ; for Arthur Rimbaud, author of the Illuminations, the journey of the European man is the reasoning as much as the place of a pillage…

A singer in multiple styles (lyrical, choral, medieval, traditional), choirmaster, composer and teacher, Geoffroy Dudouit has followed an atypical and self-taught path to train himself in the vocal trade. That is what enabled him to come across alternative and original practices that found his present teaching. Medieval poetry and contemporary poetry are at the centre of his creative approach, which three records already bear witness to.

A Mediterranean between two lands, two cultures, this mixed aspect of Damien Toumi’s identity greatly influences his career, each of his trips in the Mediterranean is an opportunity to bring back in his luggage a new language, which he loves speaking or singing. A lover of accents and dialects, his encounter with the occitan language and culture echoes a vision of the human citizen, where cultures, language and musics swap willingly…

It is in Italy and in Bulgaria that Manu Théron discovered himself a singer, due to the assiduous frequentation of traditional musicians. From then on, resolute to re-root occitan singing into its mediterranean horizons, he founds Gacha Empega, then Lo Còr de la Plana, imagining for the polyphony a role of reappropriation at the service of a renewed occitan culture. That is what he devotes himself to promote in numerous projects, on stage or in his teachings.

Thomas Georget took some time to understand that he loved singing. He then tasted contemporary, ancient, art and traditional music, dancing and storytelling, quite indiscriminately and training himself to the flow of the encounters he made. But he always attached himself to the musics that are performed with more than one person, stage and audience. His creative grounds are now polyphony, vocal dancing music and ancient practices, always between oral and written practice.

Guillaume Maupin was born in the seventies in the nick of time. Originally from Saintonge, he lives in Brussels. Besides his remarkable solo concerts, he can turn into an intimate storyteller, an erudite in anglo-saxon folk music, into Loosy the Pooh within the degenerate group Music for Rabbits, into an a capella singer within the Tartine de Clous trio, or into a human juke-box, performing about 200 tunes in a box built and covered with gaudy colors for the occasion. 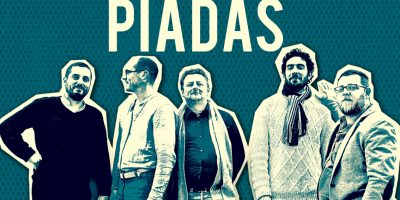